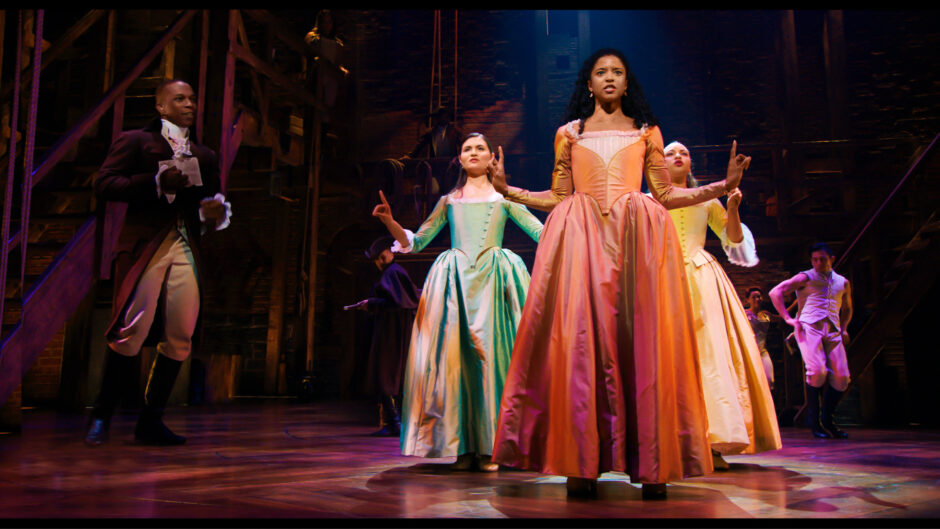 This might be a first on Maximum Cinema: a review of a Broadway stage musical. But before you protest about this unusual practice on a platform dedicated to films and series, let me assure you: this is not just any Broadway show but the long-awaited recording of Lin-Manuel Miranda’s international phenomenon «Hamilton», which was released on Disney+ at the beginning of July. The ambitious streaming experiment aims to make an immediate and exclusive live show accessible to a wider audience – and, ultimately, turns out to be a riveting, relevant, and surprisingly cinematic viewing experience.

Up until its digital release earlier this month, «Hamilton» the stage show, to most people, might have seemed like a mythical and oft-referenced creature that only ever appeared to a very exclusive group of theatergoers: well known for its exorbitant ticket prices (legends have it that resellers charged thousands of dollars for even the most distant of seats), Lin-Manuel Miranda’s half-sung, half-rapped musical about America’s founding fathers, which premiered Off-Broadway in 2015 and eventually went on to win eleven Tony Awards, was something that was on everyone’s radar, something constantly referenced, something everyone knew and maybe also cared about – but, necessarily, something that only a few geographically and financially lucky people were able to actually experience.

«‹Hamilton› brings the theater experience to our living rooms – and, in many ways, turns it into something new and exciting.»

Well, enter Disney+: in the midst of a global pandemic, in which entering a theater containing hundreds of people seems but a distant dream, the streaming platform announced the release of something quite extraordinary – a film-like recording of the original Broadway cast, assembled from two filmed live performances from June 2016 as well as close-ups and more dynamic shots to give the whole thing a more cinematic feel. Complete with audience reactions, the reminder to switch off all cell phones during the show as well as an actual intermission between acts, Disney+’s «Hamilton» brings the theater experience to our living rooms – and, in many ways, turns it into something new and exciting. 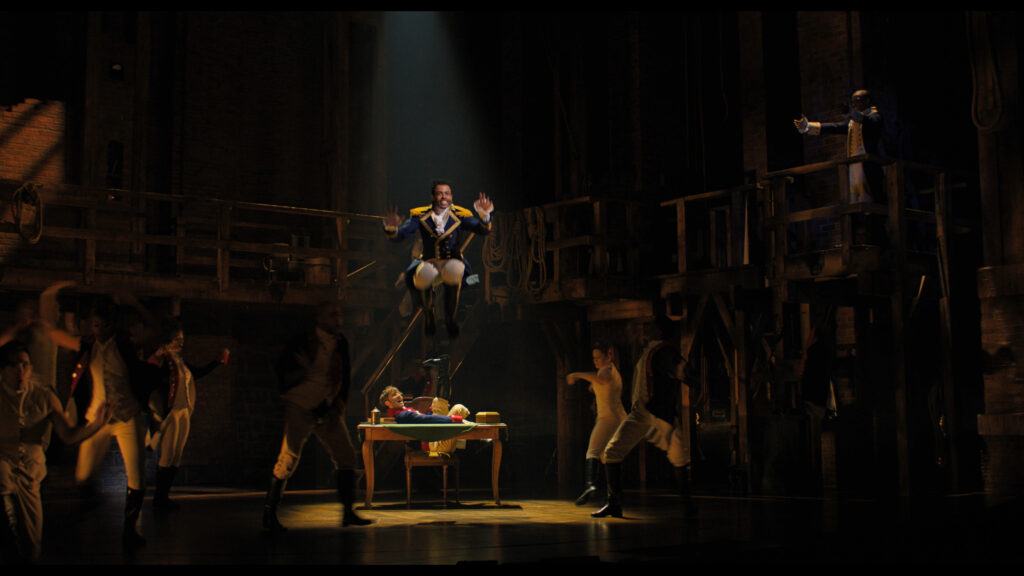 The challenge of a project such as this, it might be presumed, is to both capture the unique atmosphere and perspective of sitting in an auditorium as well as adapting them for the more dynamic and three-dimensional point of view of a cinema audience. From its very first shots, «Hamilton» demonstrates that it does not just succeed at merging theater and cinema in a satisfying manner, but that it creates a bridge between the two that enhances the experience of both: filmed with ten cameras from various places within the theater as well as moving Steadicams and dollies, director Thomas Kail transitions between wide-angle overviews, close-ups, and turns the camera into a member of the ensemble, fluidly moving between the actors with the grace of a dancer.

«Thomas Kail transitions between wide-angle overviews, close-ups, and turns the camera into a member of the ensemble, fluidly moving between the actors with the grace of a dancer.»

By doing so, Kail is able to place the emphases exactly where they belong: in one moment, the shots might highlight the ensemble and Andy Blankenbuehler’s explosive choreographies, in the next it might hover above the audience to capture the dynamics between the various actors – only to then zoom in on a face, a fleeting acting moment and reveal powerful nuances in the performances of the leads that would remain invisible to the more distant viewer. The comedic and captivating timing between Miranda, Daveed Diggs, Okieriete Onaodowan and Anthony Ramos (Hamilton, Marquis de Lafayette, Hercules Mulligan and John Laurens, respectively) in the first act, for example, gains additional dimensions through glances, smiles and shrugs and a camera that is there to capture them in all of their optimistic, revolutionary exuberance. 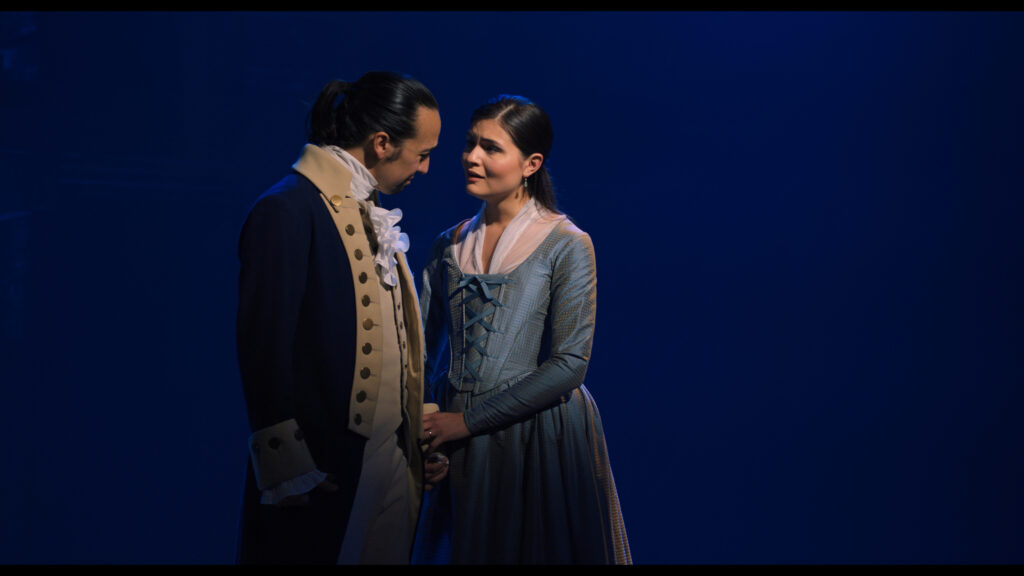 The most powerful thing about the show, however, is still the music, and it remains energizing and stunning even without the overwhelming presence of a live orchestra. Miranda recounts the story of the rise and fall of Alexander Hamilton through an ever-shifting mixture of musical styles that aim to capture his journey from orphaned Caribbean immigrant to hailed revolutionary, founding father and originator of the American financial system. «Hamilton» is full of musical nods and references that rivetingly turn political disagreements into rap battles and emotional turmoil into R&B ballads, seamlessly blending these various styles with the grand arrangements of classic show tunes.

«‹Hamilton› is full of musical nods and references that rivetingly turn political disagreements into rap battles and emotional turmoil into R&B ballads, seamlessly blending them with the grand arrangements of classic show tunes.»

It seems almost too fitting that the streaming release of this show, of all shows, coincided with the Black Lives Matter protests that are currently taking place all around the globe. After its premiere in 2015, the show was most applauded for its diverse casting and bold new take on the idea that history is the playground of white men who push any non-white, non-male actors into the background. Miranda’s vision was uplifting and inspiring to behold: history, in his take, was something worth reclaiming and re-defining, and the ongoing project that is America was celebrated as a group effort made possible through the hard work of immigrants instead of something that could ever be justifiably claimed by an exclusive club of rich white men. 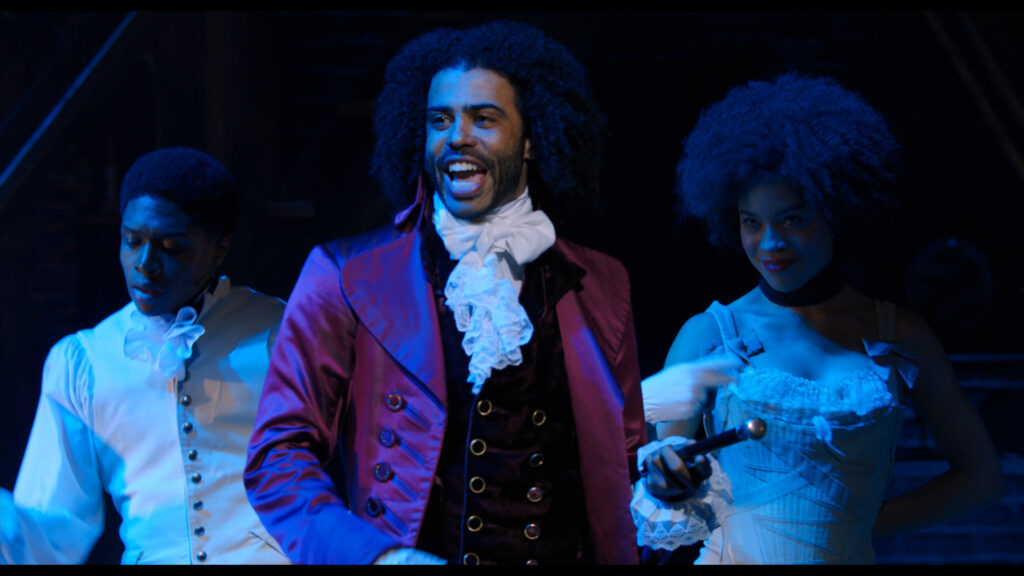 At the same time, now more than ever, this rather optimistic take on American history also opens up a space to have important discussions – some of which, justly, are more critical of the show than others. Is it enough, some might ask, to diversify a story that has so fundamentally been built around white men – and, consequently, to shy away from deconstructing and criticizing these revered heroes of the past? Is it empowering, for example, to cast George Washington as a black man, while leaving unaddressed that Washington himself was a violent slaver? And shouldn’t the deconstruction of America’s founding history go even further and, perhaps, acknowledge how much violence and suppression is woven into its very fabric – to a degree where the experiment was doomed to fail from its very conception?

«Watching a cast of incredibly talented young people fight for what was envisioned to be a better future still feels like a powerful revelation – and something that, despite its shortcomings, might still inspire, especially at this pivotal moment in time.»

The show, it can be argued, allows space for these important discussions and encourages them with its very subject matter. What makes «Hamilton» still feel so relevant and riveting in 2020 is both its revolutionary spirit as well as its central theme of history being a matter of interpretation, redefinition and reclamation, something that is continuously made sense of in hindsight. Watching a cast of incredibly talented young people fight for what was envisioned to be a better future still feels like a powerful revelation – and something that, despite its shortcomings, might still inspire, especially at this pivotal moment in time.