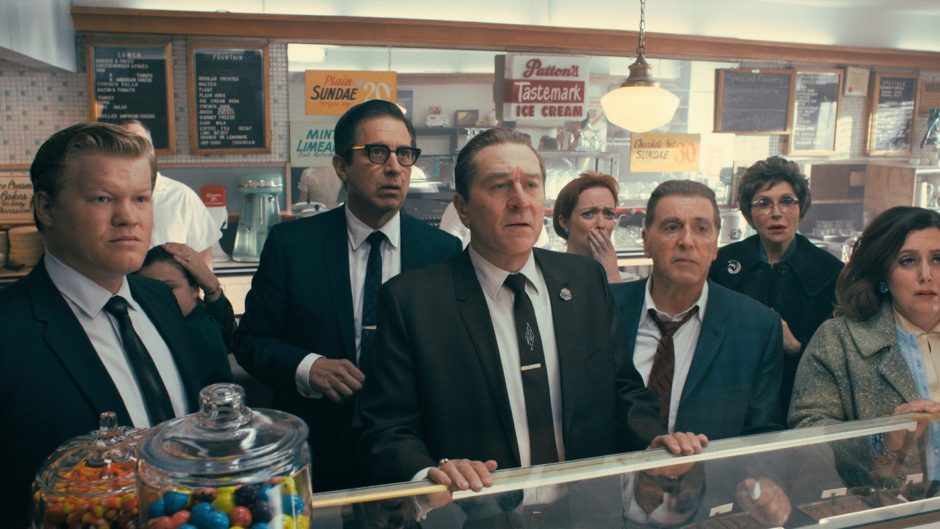 «The Irishman» by Martin Scorsese

In his latest, veteran director Martin Scorsese revisits the genre that made him a Hollywood icon: chronicling the years leading up to the disappearance of union leader Jimmy Hoffa, «The Irishman» is a mafia drama very much in the spirit of «GoodFellas» and «Casino» – with one crucial addition.

Let’s talk about Martin Scorsese and cinematic universes. No, this is not another thinkpiece about what the 77-year-old director said about Marvel movies and whether or not he had a point. (For that, read Bilge Ebiri and Richard Brody.) Rather, it’s about the different thematic streams winding their way through a career that has just entered its second half-century: for while Scorsese has only ever made one outright sequel – 1986’s «The Color of Money», which might as well be a standalone work – his narrative features speak to each other to a degree that is unmatched by most other directors, even those lucky enough to have stuck around for as long as he has.

Very broadly speaking – and ignoring the massive overlaps that necessarily arise from this kind of categorisation – you could probably make a case for four overarching concerns in the Scorsese canon. There’s the «mafia movies» his most ardent detractors like to cite as evidence for his alleged lack of versatility – the crime dramas dealing with hidden social structures, hyperviolent masculinity, and the Italian-American immigrant experience: «Mean Streets» (1973), «GoodFellas» (1990), «Casino» (1995), but also less overtly «illegal» fare like «Raging Bull» (1980) or «The Wolf of Wall Street» (2013). Then there’s the portraits of New York, from «Taxi Driver» (1976) to «After Hours» (1985) to «Bringing Out the Dead» (1999); the perennial struggle with faith in films like «The Last Temptation of Christ» (1988), «Kundun» (1997), and «Silence» (2016); and, perhaps least obviously, the ongoing investigations of how America turned out the way it did – a group of films we might term «Martin Scorsese’s Once Upon a Time in America» and which includes «The Age of Innocence» (1993), «Gangs of New York» (2002), and «The Aviator» (2004).

Enter «The Irishman», which ostensibly belongs in the first category, but whose most brilliant aspects emerge in conversation with its predecessors and the varying themes laid out in them. Adapted from former homicide prosecutor Charles Brandt’s non-fiction book «I Heard You Paint Houses», «The Irishman» tells the story of Frank Sheeran (Robert De Niro), a delivery truck driver whom the Philadelphia mob grooms as a hitman and who attains considerable power in the 1960s as the confidant of controversial union leader Jimmy Hoffa (Al Pacino).

To be clear, this is not Martin Scorsese’s best work. Even though the film, at a sizeable three-and-a-half hours, doesn’t contain a boring moment, writer Steven Zaillian («Gangs of New York», «Moneyball») is somewhat overzealous in his attempt to replicate the rapid-fire wiseguy wit Nicholas Pileggi brought to «GoodFellas» and «Casino», resulting in certain scenes and running jokes that do outstay their welcome a little bit. Also, maybe due to the fact that the project was largely bankrolled by Netflix and will thus reach the majority of its viewers on smaller screens, the production values are less striking than one would expect, with Rodrigo Prieto’s camerawork being especially hampered by lighting that makes some sequences look drabber and flatter than they should.

«But what ‹The Irishman› may lack in gloss, it more than makes up for in substance.»

But what «The Irishman» may lack in gloss, it more than makes up for in substance. In its first 160 minutes or so, as Frank Sheeran is mentored by mob kingpin Russell Bufalino (Joe Pesci, back in action), whose support for President John F. Kennedy clashes with the interests of Jimmy Hoffa, it plays like an effortlessly entertaining variation on the Scorsese mafia mode, infused with a healthy dose of historical consciousness. As much as the film will be compared to something like «GoodFellas» – its closest stylistic analogue – its exhaustive depiction of the complex entanglements of organised crime, industry, and the U.S. government also feels indebted to «The Aviator» and its fascination for the nascent military-industrial complex.

Dramatically, this is carried in equal measure by Zaillian’s whip-smart dialogue, Scorsese’s typically zippy direction – helped, as always, by Thelma Schoonmaker’s stellar editing – and three late-career highlights from three iconic actors. Rejuvenated by impeccable CGI and cast somewhat against type as the restrained, at times almost submissive Frank, Robert De Niro turns in an admirably subdued performance that emphasises the sadness beneath every attempt at gangster bravado. The same goes for Joe Pesci, in his first on-screen appearance since 2010, whose quietness as Russell Bufalino is intimidating, yes, but also drenched in a surprisingly tender wistfulness – most notably when he delights in Frank’s ability to speak Italian while sharing a loaf of bread: Pesci’s pokerface is firmly in place, but time and again, there is the hint of a man wondering whether this is the life he’d envisioned when he left Sicily all those years ago. Al Pacino’s Jimmy Hoffa, meanwhile, is a strange beast – a rambunctiously comedic turn that still manages to never let the image of the engaging rogue veer into the ridiculous. 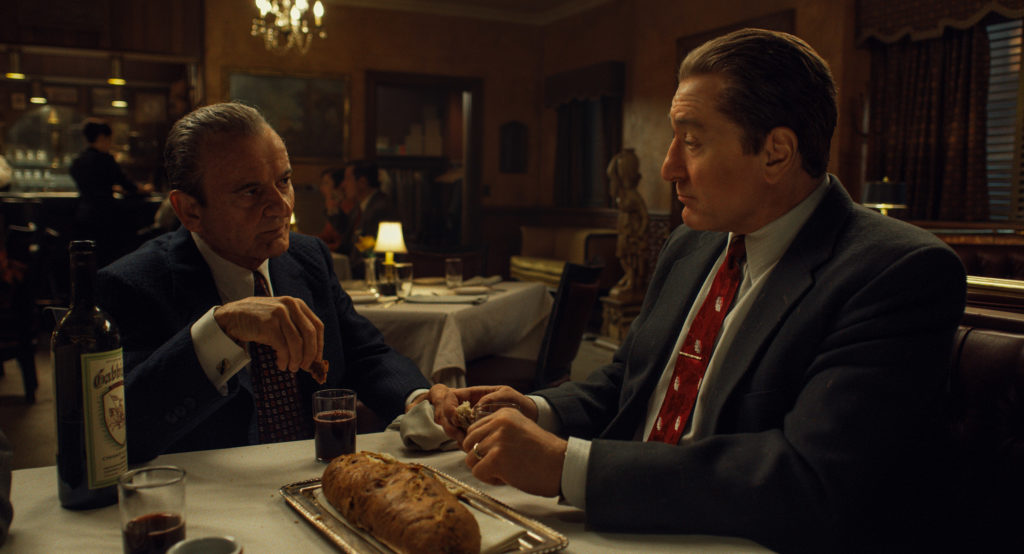 «Not only is what follows after the 160-minute mark the best part of the film and a breathtaking combination and refinement of theme – it is one of the most remarkable things Scorsese has ever put to film.»

If «The Irishman» had stopped after these 160 minutes, it would likely go down as a wholly satisfying, if not exactly mindblowing, not-quite «GoodFellas». Instead, this is merely the point where the film subtly decelerates and transcends the precedent of Scorsese’s mafia canon – where it goes beyond the traditional arc of the cinematic gangster and starts to ruminate on its characters’ violence, their latent Catholicism, and their warped sense of family, wrestling with questions of faith, guilt, redemption, and existential angst that echo and expand on the bold spirituality of 2016’s «Silence». Not only is this the best part of the film and a breathtaking combination and refinement of theme – it is one of the most remarkable things Scorsese has ever put to film.

NOTE: After rewatching the film twice within a week, I found that my original criticisms did not hold anymore. «The Irishman» is a masterpiece that, were I to review it again, would get the maximum rating.

«The Irishman» sees Martin Scorsese delve back into the mafia underworld. It's not quite «GoodFellas», but the final hour is worth the price of admission alone.